Home › Blog › Are You Struggling With A Boxelder Bug Infestation In Las Vegas?

Are You Struggling With A Boxelder Bug Infestation In Las Vegas?

While Las Vegas offers the glitz and glamour of shiny buildings and high-rise apartments, it also offers suburban living with affordable homes. Despite its desert climate and arid conditions, local homes take pride in their beautifully landscaped yards. Within these well-landscaped yards may be planted a special kind of tree inviting boxelder bugs in Las Vegas to congregate in large numbers around your property, and the sheer size of their invasion may necessitate a call for Las Vegas pest control. 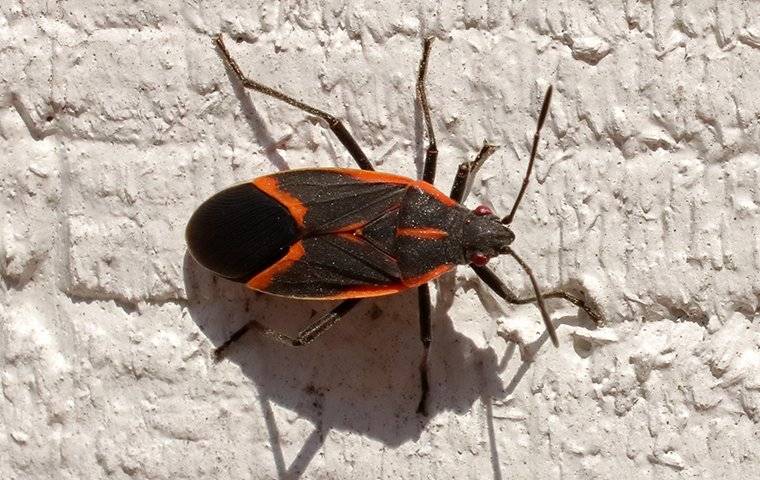 What Are Boxelder Bugs?

Boxelder bugs are true bugs. They are known for their piercing-sucking mouthparts and the distinctive pattern of their wings when they lay across their abdomen (forms an X or V). While boxelder bugs have this pattern in common with other true bugs, they have some characteristics that can help homeowners identify them from others.

Boxelder bugs in Las Vegas are a nuisance when they enter homes because they typically do so in large numbers. They love warmth; therefore, you will often find them on the southern or western parts of buildings, rocks, and trees where the sun gets most of its exposure. The sun isn’t the only thing that attracts them to your home; a particular tree in your yard is a boxelder favorite.

Boxelder bugs inherited their name from the boxelder trees they seem to adore. In the springtime, large swarms of adults lay their boxelder bug eggs in yards; they especially like the cracks and crevices in the bark. Both adults and young bugs feed on the flowers, leaves, and seeds of female trees.

When boxelder bugs overwinter, they typically gather at the base of trees or find warm areas in buildings until spring. While boxelder bugs are not dangerous or destructive, their sheer numbers can be a nuisance. The problem with boxelder bug infestations is that they can leave unsightly droppings around homes and stain fabrics; they also give off an unpleasant odor when squished.

What Can I Do To Get Rid Of The Boxelder Bugs That Invaded My Home?

Boxelder bugs in your Las Vegas home are common, and Anderson Pest Control knows what it takes to remove them. Our family-owned and operated company has been providing the highest level of pest control services in the Las Vegas area since 2002. We use Integrated Pest Management (I.P.M.) strategies to get rid of boxelder bugs while respecting the environment. When boxelder bugs start showing up in droves, place a call to Anderson Pest Control; we can provide the relief you need with our effective Las Vegas home pest control and commercial pest control services.